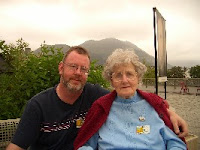 Please pray for Mary Lester who has passed away recently.

Mary Lester first came to Lourdes with the Catholic Association in 2003. Accompanied by her niece Maureen, she stayed in the Accueil Notre-Dame, and she took part in the activities of the Stonyhurst group.
Friends and family agreed that her first pilgrimage to Our Lady's Grotto in Lourdes was a time of grace and strengthening for her, since she came back to Lancashire with her leg ulcers - from which she had suffered for many years - greatly improved.
Her second pilgrimage to Lourdes with the C.A., last year, saw the beginning of her final illness, and it therefore seems appropriate that she should have died on 8th December 2004, the 150th anniversary of the Feast of the Immaculate Conception. In the Accueil, and in the weeks she spent in various hospitals, she was greatly supported by members of the Catholic Association, the Stonyhurst pilgrimage, and her family, especially Maureen and Mary's son Fr. Tony, who had joined the pilgrimage for the first time last year.
Fr. Tony celebrated her funeral in St. Peter and St. Paul Catholic Church in Mawdesley, near Chorley, on Wednesday 15th December. Tony was joined by a large number of his fellow Carmelite friars, including the Prior General who had flown over from Rome to pay his respects.
It was very good to see a large turnout from the Catholic Association Hospitalité, including the President (Michael Cleary), and clergy and pilgrims from Stonyhurst. During the placing of Christian symbols on the coffin, Angela Bergström-Allen laid out Mary's Carmelite scapular, and Clare Johnson - who had nursed Mary during both pilgrimages - laid out the photographs from Lourdes which Mary had enjoyed showing to her family and friends.
May she rest in peace.
Posted by Catholic Association at 13:07