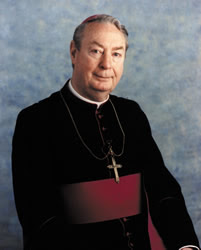 The Bishop Emeritus of Southwark, Bishop Charles Joseph Henderson, died 0n 10th April, at Park House, Blackheath, after a long illness. He was 81. Bishop Henderson's funeral took place at St George's Cathedral, Southwark on Tuesday 25 April at 12noon.
Bishop Charles Henderson will be remembered as a dedicated and tireless pastor and also as someone who led the way in putting into practice the Second Vatican Council's documents on Christian unity and inter-faith dialogue.

He was born in Waterford, Ireland, on 14 April 1924. The third of five children and the only boy, he grew up in the Ballybricken district of the city. At the age of five he went to Mount Sion School, run by the Christian Brothers. He entered St John's Seminary in 1941 and was ordained in Holy Trinity Cathedral, Waterford, by Bishop Daniel Cohalan on 6 June 1948.

His first appointment was as a curate at St Stephen's, Welling. In 1955 he moved to English Martyrs, Streatham. He become chancellor of the diocese in 1958. When the new Diocese of Arundel and Brighton was created out of Southwark in 1965, Monsignor Charles was appointed vicar general of the it for a short time. He was made a papal chamberlain in 1960 and a prelate to the papal household in 1965.

In 1968 he became episcopal vicar for religious and, the following year, was appointed parish priest of Our Lady Help of Christians, Blackheath. On 8 December 1972 at St George's Cathedral, Southwark, Archbishop Cyril Cowderoy ordained him as auxiliary bishop in Southwark and titular Bishop of Tricala. After the death of Archbishop Cowderoy in October 1976, he was put in charge of the diocese until the installation of Archbishop Michael Bowen in April 1977. Following the episcopal ordinations in 1980 of Bishop Howard Tripp and Bishop John Jukes, he was given responsibility for the south-east London. In 1976 Bishop Charles was appointed to the Ecumenical Commission for England and Wales.

For any progress to be made in Christians of different traditions drawing closer together, Bishop Charles believed that friendship had first to be built. Sometimes at the Commission meetings he would read aloud some of the poetry he had written. Afterwards, everyone would file into the dining room, where cold meats, salad, cheese and fruit would be laid out on the table. He was a member of the English Anglican/RC Committee from 1982-92 and a member of the Methodist/RC Committee from 1983-92. Between 1982-86 he served as a Catholic consultor and observer at the British Council of Churches. In 1998, he remarked: "We have achieved in my lifetime as a bishop the undoing of the damage of the Reformation."

When Bishop Charles established the Bishops' Conference Committee for Other Faiths in 1984, most Catholics knew little about the origins, history and beliefs of other world religions. He made up for his own lack of knowledge by showing an openness to all that was good in these faiths and eagerness to listen and learn. To increase understanding and to encourage dialogue, the Committee began to produce a series of booklets, Getting to Know People of Other Faiths and Family Life. In 1986, Bishop Charles took part in the first London Inter-faith Pilgrimage, which ended at the peace pagoda in Battersea Park.

Pope John Paul II recognised his expertise and knowledge in inter-faith dialogue by appointing him to the Pontifical Council for Inter-Religious Dialogue in 1990. As well as this, he was also chairman of the Bishops' Committee for Catholic-Jewish Relations from 1992-2001, vice-chairman of the Council for Christians and Jews for many years, and a member of the Churches Commission for Inter Faith Relations from 1994-2002. His outstanding work over seventeen years in developing understanding and good relations between the Jewish and Catholic communities earned him, in 2001, the Interfaith Gold Medallion from the Sternberg Charitable Foundation.

On January 26 2001, Pope John Paul II accepted his resignation. But it was only a resignation on paper. His diary remained full. Much of his time was spent travelling around south-east London celebrating confirmation.

His ecumenical and inter-faith work made a huge contribution to the life of the Church. But, of course, his primary responsibility was to the people and priests of the archdiocese. Visiting schools was one of his priorities, and he held regular meetings for head teachers to discuss various issues. He was also chair of the finance advisory committee of the National Catholic Fund from 1988-2000. One time when someone told him about a priest experiencing difficulties in his life, he replied: "Pray for him and be kind to him. Some of these men are very brittle." As a young priest, he had taken the pledge and remained faithful to the Pioneer Total Abstinence Association. He supported movements, such as Focolare, the Neocatechumenate, and Charismatic Renewal, believing that they should be integrated into the archdiocese.

In September 2005 he took part in one of the largest events in the archdiocese for many years when an estimated 7,000 Catholics attended a Mass at Aylesford Priory to mark the Year of the Eucharist.Bishop Charles never failed to return to Ireland twice every year. In 1973 he was made a Freeman of the City of Waterford. That same year, he was made a Knight Commander with Star of the Equestrian Order of the Holy Sepulchre of Jerusalem. He also travelled to Thailand several times to visit the Pattaya Orphanage Trust, of which he was patron.His patience and ability to listen enabled him to help resolve differences between individuals or in organisations or parishes. He never forgot to send a thank you note after an event. In his office in Blackheath, all the urgent items would be laid out across the floor. He paid attention to detail and liked to see things done properly. Each day, was built around Mass, the Divine Office and the rosary.

In January, Bishop Charles was diagnosed with cancer and eventually transferred to St Thomas' Hospital. Despite his worsening condition, a friend drove him the short distance to St George's Cathedral on February 14 to attend the episcopal ordination of Bishop Patrick Lynch and Bishop Paul Hendricks. The hospital had brought forward his radiotherapy treatment to enable him to be present.

Posted by Catholic Association at 11:04