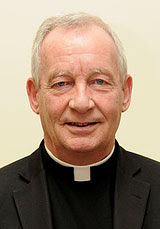 Congratualtions to Archbishop Peter Smith, who was installed at St George's Cathedral, Southwark on Thursday, 10th June 2010 to become the new Archbishop of Southwark.
Archbishop Peter Smith was born in Battersea on 21st October 1943. He completed his secondary education at Clapham College and gained his degree (LLB) from Exeter University in 1966. He studied for the priesthood at St John's Seminary, Wonersh, and was ordained Priest on 5th July 1972.
His first appointment was as an assistant priest at St Francis, Stockwell (1972 - 1974). In 1977 he gained his Doctorate in Canon Law (JCD) from the Pontifical University of St Thomas Aquinas in Rome and became Professor of Canon Law at St John's Seminary (1977 - 1984). He was parish priest of St Andrew's, Thornton Heath, (1984 - 1985) and Rector at St John's Seminary from 1985 - 1995.
He was appointed as Bishop of East Anglia in 1995 and Archbishop of Cardiff in 2001. On 30th April 2010, the Holy Father announced that he would succeed Archbishop Kevin McDonald as the tenth Archbishop of Southwark.
Archbishop Peter is Vice-President of the Bishops' Conference of England and Wales. Since 1998, he has been Chairman of the Department of Christian Responsibility and Citizenship of the Bishops' Conference.
His previous responsibilities have been as Chairman of the Catholic Truth Society (1993 - 2007) and Chairman of the Central Religious Advisory Committee (CRAC) of the BBC and ITC (2001 - 2004).
Posted by Catholic Association at 15:17