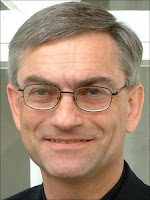 The Right Reverend Michael Evans, the Catholic Bishop of East Anglia, has died in hospital at the age of 59 after a long battle with prostate cancer.

He was diagnosed with an advanced and aggressive strain in 2005 but continued his ministry throughout his treatment.

The leader of Catholics in Suffolk, Cambridgeshire, Peterborough and Norfolk carried out limited engagements as his condition deteriorated.

He continued to work until his admission to hospital last Thursday.

Canon Evans was appointed the third bishop of East Anglia in February 2003 by Pope John Paul II and was ordained at the Cathedral of St John the Baptist, Norwich, in March of that year.

He was previously parish priest at St Augustine's in Tunbridge Wells, Kent.

On his appointment Canon Evans said: "I was astonished to be appointed as Bishop of East Anglia, and have a real sense of my unworthiness for this responsibility, but I accepted this new ministry with a joyful though nervous 'yes'."

He became well known throughout the diocese for his teaching and set up an annual adult religious education programme.

He was ordained a priest for the Archdiocese of Southwark in 1975, and spent two years as assistant priest at St Elizabeth's in Richmond, Surrey.

From 1977-1979 he studied for a Master of Theology degree at Heythrop College, University of London, and then returned to St John's Seminary for eight years as lecturer in Christian doctrine.

From 1985-1987 he was Vice-Rector at the seminary, with the then Monsignor Peter Smith (later the second Bishop of East Anglia, and now Archbishop of Southwark) as Rector.

A statement from the Diocese of East Anglia is expected to be made later.

Archbishop Peter Smith said: "I have no doubt that he [Bishop Michael] will be greeted by the Lord he served so faithfully, with the words: ‘Well done good and faithful servant, enter into the Kingdom prepared for you."

Please visit: http://tinyurl.com/69z83r2 for full statement.In addition, please do visit a recent interview with Bishop Michael Evans which took place after Easter 2011 in which he talked about his illness, and about finding hope in times of adversity: http://www.dayforlife.org/Day-for-Life/Video

Posted by Catholic Association at 09:18