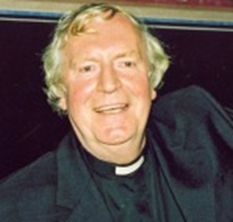 Please pray for Fr Damien Walne, who passed away today. He was a great stalwart of the CA Pilgrimage and was the Diocesan Director for Northampton Diocese for many years. He died today after a short illness. May he rest in peace and rise in glory. His full obituary is below.

Fr Damien was born 19 May 1940 at Rostrevor, Co. Down, Northern Ireland. At the end of the Second World War moved to England – first of all to Norfolk where the Walne family farmed. Damien’s dad being the “black sheep” left farming to enter the Royal Navy in which he fought during the war captaining several vessels.

His dad retired early to be with his family when Damien’s brothers: Victor and Martin were born. The family then moved to Cambridge where Damien’s dad secured a teaching post. They became members of St. Lawrence’s parish where all three brothers served as altar boys for several years.

Attended St. Andrew’s RC Primary School before moving across the road (old site of the Perse School) after the 11+. Victor becoming Head Boy the year the school moved to its present site on Hills Road. Meanwhile his elder brother frittered away his time on sport, representing his school at cricket and hockey.

On leaving school Damien went into the bank, working for Barclays. Three years later he left to join ABC Cinemas…eventually booking the first of the Road Shows (i.e. Ben Hur, The Ten Commandments) around the Eastern Counties from Norwich.

A move then came to Cambridge where he was asked to look after and see to visiting artists who came to the Regal Cinema there for “One Night” stands still popular today in cinemas and theatres across the land.

Damien missed meeting the Beatles, preferring to watch the Varsity Match at Twickenham – the only time the group, which shortly became very famous, ever appeared in Cambridge.

Sensing the call to the priesthood for some time, but not believing that was what God wanted of him, Damien eventually took the step. Damien studied for the priesthood at Oscott College where at the age of 30 years he was ordained a priest.

Fr Damien was Diocesan Director for Northampton for many years, and worked closely with a number of pilgrims to make sure they had a week to remember. I particularly remember him letting me help promote the Northampton Pilgrimage to Lourdes when I lived in Aylesbury. He was always a perfect gentleman and would often ask after Terri and Joseph. We will miss him very much.

He was also a ghost writer for many autobiographies and a writer of poetry. He never talked about this side, but simply Google his name or visit a book store on-line, and you will see.

In a recent interview, he said: “I feel nothing but gratitude for an interesting and varied life – for wonderful parents and grandparents, brothers, friends and the support of countless people in the parishes I have served, and most of all for the gift of the Priesthood.”

May he Rest in Peace and rise in glory!

Thanks to the Parish of Great Billing who have an excellent biography of Fr Damien.
Posted by Catholic Association at 18:04