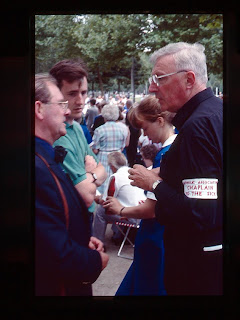 Canon Brian Murphy-O’Connor, priest of the Diocese of Portsmouth and one time CA Chaplain to the Sick & Hospitalité, died in the early hours of Monday 11th June. May he rest in peace.

Brian was a great supporter of the CA Annual Pilgrimage and well known to many of us. He was also one of the founding members of the August stage group, which will be at it's strongest for some years, in 2012.

Canon Brian Murphy-O’Connor’s Funeral Mass will be concelebrated at St. Peter’s, Winchester on
Wednesday 20th June at 11.00 am.  There is no parking on site but it is only 10 minutes walk from the Railway Station